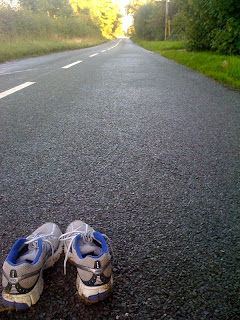 I was travelling a good bit around Scotland, England and Ireland. Despite the travel i found enough time to get satisfying training runs in.

Had a really great long run last weekend, which i started at 9pm in Carlisle. I found a nice loop around the scenic castle. I felt amazing and the time flew by. I’m a night-owl, that’s for sure.

The final result was 88 kilometres with 6 runs. Not bad despite the lack of time.

Week 35 was the first week since months where i got a total of 100 kilometres in. In fact that i had one of the worst runs since months as well. I completely bonked on my Sunday long run in phoenix park.

I had no energy in the tank. The whole failure was my mistake, as i was getting a very, very light breakfast in before the run (1 X coffee plus 1 X mars-bite). I stopped after 120 minutes went home and slept for 3 hours. To get additional mileage in i went out for a 45 minutes jog around Donadea Forrest Park in the evening.

Now i face another week of NYC preparation. Overall i feel good and i slightly try to increase the mileage.