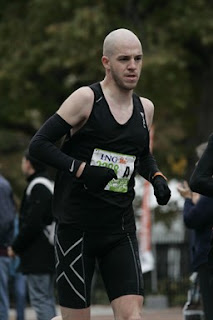 It was dark and cold when i stepped out of Uli`s house in Manhattan on Sunday morning. I switched on my ipod in shuffle mode and the first random song that pumped my headphones was Bob Marley’s “stand alone”… the call for the day!

I walked a couple of blocks to get the Central Park Track Club Bus to the start. Thanks again for having me. The journey went very smooth and after a couple of minutes on the, unusual, empty NYC roads we arrived on Staten Island. From the bus stop it was just a short walk to Fort Wadsworth, the start area. Everything went easy and the atmosphere was very relaxed. I grabbed a bagel, coffee and water and relaxed in my warm sleeping bag on the grass. The morning was luckily dry so it was no problem to stay out of the tents and have a bit time for food and a little chat.

45 minutes before the start of my wave i made my way to the assigned section beside the impressive Verrazano-Narrows Bridge. I met another German guy while warming up and we chatted along until the start of the race. The hole start procedure was so easy. I expected a pure mess but it was perfectly organised and no rush at all. I got rid of my last “warm up throw away clothes” and the race was on. As standing in 4th row in the green area together with the local elite it was no problem to run relaxed after a couple of seconds. 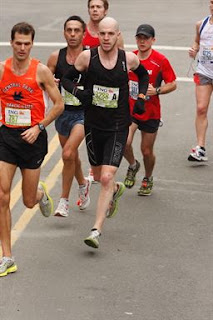 On the first meters the usual start up hectic went on and everybody was just searching for the best groups to stay with. It was important to get a bunch of runners as the wind was hitting hard on top of the Verrazano-Narrows Bridge. It was a brilliant scenario. On the left thousands of runners waiting for the start and cheering us on. After that the view on the bridge – stunning. I just took a couple of seconds and was watching the Manhattan skyline where the race should have an end in a couple of hours.

I had problems finding a decent group at the start. People hitting out like crazy and i don’t want to get caught in that start hysteria. So i relaxed and waited what going to happen. Just shortly after the 1st mile mark i saw a good group and jumped in. There were some NYAC guys and CPTC guys in there as well. All familiar local team colours i could rely on. The route made its way towards Brooklyn. After the bridge downhill we ran a bit on a highway and then made the way into Brooklyn. We left the highway and from that on it was just crazy. People and music everywhere. Just fantastic and electric. Starting out to fast is so easy in this environment. Our group was good and after a short chat i found out that one of the guys was Uli`s neighbour. 40.000 people in a race and i meet the person that’s living beside the place I’m staying – crazy. We chatted on and he told me it was his 9th NYC marathon. I couldn’t get any better guide around the city. We worked well together. Drafted as the wind was heavy on the long stretch through Brooklyn. 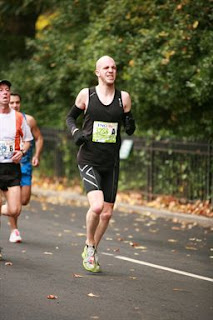 The pace was good. We passed the first 5k in low 19 minutes and worked our way in front of crazy supporters on the streets. That’s road running in perfection. So nice and motivating. No quiet corner anywhere. People shouting, bands playing and so on.

Just shortly before the half marathon mark on Pulaski bridge a couple of guys picked it up and i didn’t respond. We passed the 13.1 mile marker in 1:21 and i felt great. The running in the group made my life easy. Great camaraderie on the aid stations as well. People charred drinks and helped each other out. I got a good amount of Gatorade and water in on all aid station. That used to be a problem for me in the past but not in this race. I got a good amount of fluids in and also was able to handle my gels like i planned to.

After 15 miles the queensboro bridge was just around the corner. As i was reading and listening to lots of story’s about the bridge i took it easy and didn’t follow the lads who where hammering up the bridge. I could judge the whole thing and as i wanted to have (more less) fresh legs for 1st avenue i didn’t increase the tempo. I was feeling the race and the tough course alight and just didn’t want to push hard at this stage.

Queensboro is a long bridge. It was crazy. Running in the noise around the streets and then being on this huge bridge in complete quietness. Another very intense moment in that race. One of the most stunning feelings followed after the downhill of Queensboro. I’m a decent downhiller so i could relax the legs a good bit and caught some guys in front of me. I turned left and couldn’t believe my eyes. People everywhere – stunning. There was no one in front of me at this stage so the people were waiting for runners. I took the left turn and raised my hand. The echo was phenomenal cool. Shouting and screaming! I took the next left turn into 1st avenue and was shocked. I expected people but not that many. Great and noisy atmosphere. It was so loud that i even couldn’t hear my parents. They were standing just 5 metres beside me on the road and shouting, i didn’t hear them.

1st avenue is long. Very long. And its uphill. So the course and especially that long straight road into the Bronx was grinding me down. I started to struggle. Couldn’t hold the speed. Now it was time to fight. That’s whats the marathon is about. The first 20 miles are easy but the the race starts after that…

On the climbing of the bridge that leads into the Bronx Simone caught me. He still looked fresh. We chatted a bit and he tried to convince me staying with him. I couldn’t. He was faster then me and i didn’t had the legs to stay with him. Shortly after him Joan Benoit Samuelson passed me as well. She was to fast and i was a bit pissed of that i couldn’t stay with her 😉 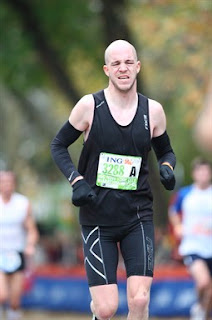 The Bronx is a crucial point in the race. Not surprisingly as it is between the 20 mile and 21 mile mark. I struggled big time on the ups and downs around that place. I tried to get my rhythm back. I had to fight. On the climb of the bronx bridge into Manhattan the German guy i was talking to at the start came by and shouted at me. When i saw him i kind of woke up again and got into the rhythm again. I pushed as much as i could. The next long uphill stretch was on the way soon enough. The 5th avenue towards central park. It just seemed so long and so tough. Mentally this was tough but the legs came back and i could push. I was happy to enter the park. I know the roads from training so that gave me some power and motivation back.

The people in central park where amazing as well. Just brilliant to run there and have the crowds. But the hills in the park are the last killer part in that race. Those guys hurt – a lot! I went on with my grimy fighting face and the last kilometres are the toughest. To see the statue at Columbus circle and then the finish area is just great. It was tough but as you see the end it gets better. 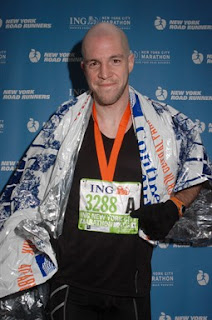 Thanks to Uli for hosting and mentoring me. Thanks to my parents who made the support stop-over and as always thanks to all the nice texts, emails and phone calls etc. – it really helps! THX!