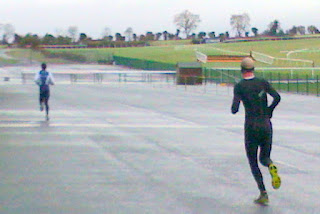 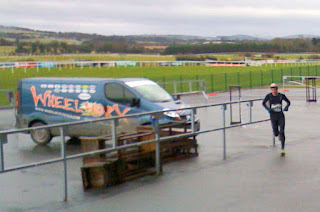 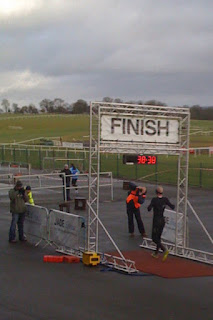 it was a cold but lovely and sunny morning. i decided to cycle the 10 k to the start just a littlebit outside the town where i life, naas. the roads where frosty and so a bit slippery. all the fields and the wicklow mountains where covered with a tiny bit of snow. a beautiful scenery.

when i entered the transition zone in front of the main stand at punchestown race course there wasn´t a sign of any bikes! i met rob (“triathlete´s cant bike!”) and he told me that they cancelled the duathlon and instead of going out for the run-bobsleigh-run competition there will be a run only race around the ambulace track. duathlon cancelled!

the weather turned lousy: rain, snow and wind. it got worser and worser. a good decision to cancel the duathlon. sp everybody got ready for the run and lined up in the rain.

the start pace was very defensive so there was a little lead group of 8 guys travelling during the first of the three laps. i hang in there and it was very handy to draft in the group as the wind got heavier and heavier. the first round was over and the tempo increased. i had to pay tribute to 2 day in a row speed sessions and fought my way to 6th place in a time of 38:37. nobody really knows how long the run was. i suppose it was around 10.5 k.

shortly after my finish it started to rain and storm again. i just got a very handy lift back home and went directly under the shower where i remained for 2 hours 😉 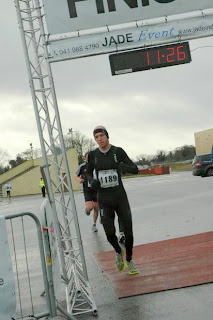 Is it raining with you?