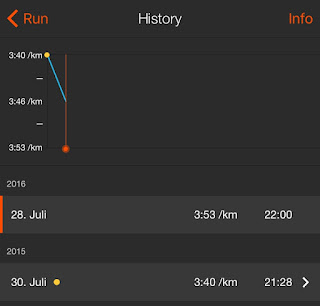 The twelve-monthly 6k-ish corporate jog round town leaves no fitness shortage under the merciless “form-table”. With not as much (let’s say: no) emphasis on running competitions and consequently leg speed the outcome was not a huge surprise but still desperate.

Threshold workouts cannot be found in my training diary and that means that with my “talent” there will not be a spectacular outcome when it comes to short course running races. Even though I had the possibility to train regularly on the track the last few years I did not follow this routine during this season. Thus I recorded a glum 3:53/km average for 5,6 kilometres – ruthless. Much-loved Strava told me straight away what I already knew. My top speed is not top speed.

Compared with last years’ time (…which was evil either) I got even slower. As my 2016 season is laid out towards SwimRun racing, performances like this are a honest reality check. Even though base fitness is there it is a lengthy procedure for me to build up threshold fitness. I did not put enough emphasis on speed workouts in my training and this cannot be hidden. It is also crazy to see that I used to run half-marathons with a quicker average speed. This 5,6 kilometre struggle was not laid-back, I tell you.