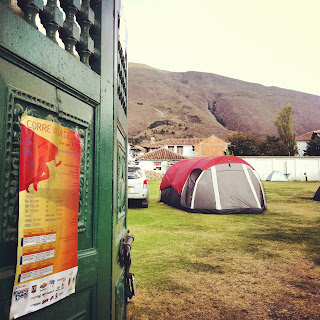 At the Banff Film Festival in Bogota the other week I bumped into Oswaldo who I met at the TNF race in La Calera. After raving about the exciting flicks he told me about a race close to Bogota the next weekend.

Pointless to say I decided to join Oswaldo and his friends. After some explorations round Bogota I ended up in the charming colonial town of Villa del Leyva (2,144 m). I spend the days prior to the race running the countless mountains around the place and drinking heaps of good coffee in town.

Sunday, race day, started off early as always and a good crowd of around 600 people lined up. When the organizer stepped on the microphone to announce something I got reminded that I’m still in South America. As there was a massive fire in the mountains the police, the fire-brigade and several other officials couldn’t help the race organizers. And as always a solution was found pretty fast. The half-marathon couldn’t use the initial route that would have required to close off some vital crossroads. The organization decided to run all races (6k, 10k and the half) out of competition on the same loop.

I was signed up for the half-marathon but then decided to run the 10k instead. The route was impressive and pretty harsh. I didn’t check the course profile and was amazed by the climbing that waited for me. The course was 50% on road and the other half on some rocky back-roads. Great running.

I didn’t wear a watch. Once I crossed the finish line I waited for the guy behind me. His Garmin GPS thingy told him that he just dipped under 38 minutes on an exact 10k course. So I guess I ran pretty solid 37 minutes time. Pretty happy with that considering the height, the tough course and windy conditions. I stopped at the finish, had a chat and a drink. Once Cesar passed the finish-line to go out for his 2nd loop I decided to join him for his half-marathon. The pacing payed off as he ran the second half significantly faster.