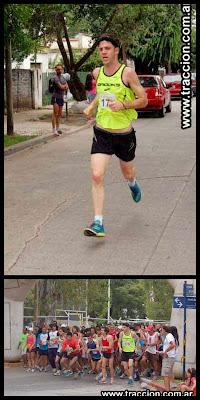 You just can not resist the good weather over here. After some light jogs and drills around my new neighbourhood i decided to test the machine at a 3k race in Palermo Park. The „Maratón Hispano Argentino“ was on the cards. They also overed a 10k but i decided go for the 3 kilometers as i wanted to see how it feels to run hard in the heat before going up to a bigger distance. My short term goal ist o run fast at the “San Silvestre Buenos Aires” (8k) on the 31.12. so i need to get some speedwork in.

As last weekend the crowds were fairly decent. I misscalculated the journey and just had time to get changed and sprint to the start line. Lucky enough i already was registered and had the race number. Until the 1k mark it was hard to see where in the field i was as the 10k and 3k races started together. I tried to stay with the leaders as long as possible. When the turnaround point for the 3k came up i saw that i was in 2nd place. I tried to catch the leader but it was impossible to increase the speed. Breathing fully in in those conditions is very hard and i suffered the last couple of meteres in the heat. I could hold the 2nd place but the heat took a good amount of energy out of my body.

Today was time for another race around the Ciudad Autónoma de Buenos Aires. I travelled to Castelan on the outskirts of the city to run the “La Carrera de Nahuel” 5k. Again i underestimated the size of the city and the time it takes to get from one place to the other. Just on time i arrived at the registration and, as happened on Thursday, i was right on time for the race start. 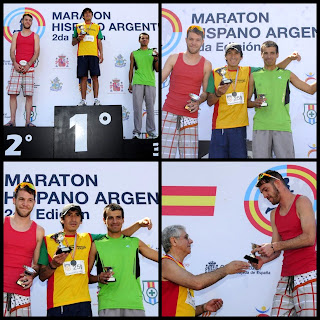 Same procedure again. I stayed at the back of the leading pack which was travelling with some nice speed. Lucky enough it was overcasted so it was only hot. As one guy surged after 3k i could not hold the group and came home in 6th place. Great experience again to run on streets that are even worse than the ones in New York.

Overall it is a very special vibe at road races here. Good crowds paired with music and a extremly friendly atmosphere makes it very special to run in Argentina. I still wonder how all those people manage to have enough energy left to dance after a race. The Ska Band that was playing at the after-race party today definitely made a lot of people move!