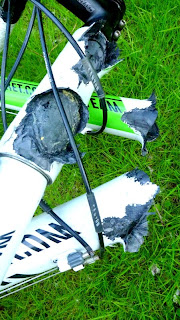 “Have you also been at that race in Richill?” Emma was asking me as she tried to move my arm in the right position to get a scan done. “Yes, I was…”

I was not the only one ending up in the Craigavon hospital today. Unfortunatelly the race was just over before it really started for me. Too cut a long story short – i crashed. The first time in my short racing career i touched down. And it went fast, really fast. The race was in it’s last loop and i felt good. I was in the middle of the bunch and on the go to move up towards the front. The long downhill stretch just 2k into the last loop was the finish for me and roughly 20 other riders today. A guy hit a water bottle and fell. The rest is history made at a bit more than 50 kmh.

I could not get around the scene and bumped straight into a guy that was already on the ground. Lucky enough i was close to the side of the road and ended up on the grass. I was a bit dizzy and when i looked around and checked everything my bike was in two pieces. My beloved and trusty bike is gone. Sad enough! The body itself is alright and not too bad. The ambulance was at the scene in seconds and after helping the guys with the really bad injuries they cleaned my cuts at the right elbow and the right knee.

For a final check i went to Craigavon hospital. When i arrived there some familiar faces from the race were just sitting in there already. I got scanned and 4 stitches on the elbow. All good so far.