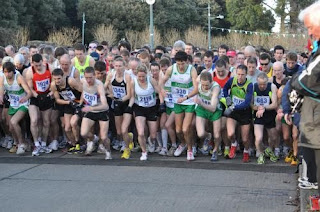 I opened the curtains and what I saw didn’t really motivate to go out – It was snowing!

I turned around and went back to bed. In my mind I was preparing for a tough and cold day in Raheny. The second look out of the window, an hour later, saw a huge improvement. The snow was gone and the sun was shining – that’s Ireland. The weather is always a surprise. In this case a positive. Nothing to complain!

There are several “Classic” Road races in Ireland. The Raheny 5 miler is definitely one of the Top 3. Every year this race marks the season opener for runners across the island. This year over 2.000 runners signed up for 8.04672 kilometers around the north of Dublin.

The weather turned out to be amazing. I enjoyed the beautiful sun when I warmed up around St Anne’s Park and Dollymount Strand. Perfect running conditions this Sunday: No wind and 5°C. 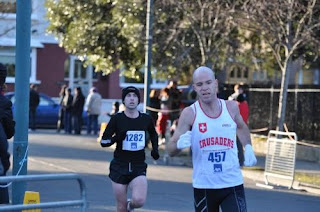 After 40 minutes of light jogging and some sprints i lined up for the race. Just on time I didn’t really had to wait long for the gun. The first meters were easy. I wanted to run defensively as I didn’t do any speed work until now. The clear goal is Boston in April. At the moment I try to get the fundament for my marathon. Knowing that, I just tried to find my rhythm and settle in with a decent aggressive pace.

The course is tricky as the first part is slightly downhill. I hang in and was running in a nice group. I stayed in the pack and drafted as good as I could. The roads are not the best so it is not the worst thing to keep an eye on the ground. During the first couple of minutes I hit a pot hole. Nothing major but it reminded me of the conditions.

A good crowd was lined up beside the streets and it is always nice to hear your name shouted by someone. Some people along the course must have known me. I couldn’t really respond but thanks anyway 😉

Until mile 3 the speed was OK. But after that it started to hurt and I had to fight. I miss the speed and the leg turnover – that was no surprise. To push yourself in a race is far easier than in training so I gave it everything to get some quality running in. 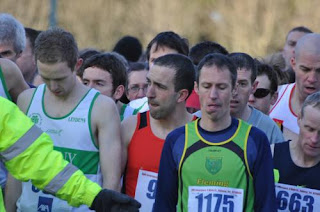 When we entered Howth Road I had to push hard not to loose contact with a guy I was running. After 1k on the Howth Road beside the sea the course turns left and goes up a little hill. During the race that thing really hurts and so it did for me.

The last mile was a fight. The guy in front of me was gone and I felt another runner coming from behind.

“Get the foot down!” – Turlough was standing beside the road and was screaming at me. I managed to get it “down” (… a bit). I had to sprint the last 200 meters to hold the other guy back. The clock showed 28:50, 4:37 behind the winner. I’m not really happy as i wanted to get a bit closer to the „28“. Overall I think it is OK and as much as I could expect after a heavy week of running.