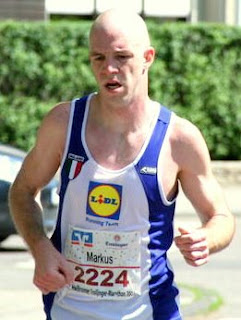 1:30:36. Thats the sad turnout of this sundays 21k around my hometown heilbronn in germany.

and it´s all about a allergy thats in me and i havent paid attention – hay fever.

i was over in germany since friday. the weather was very “irish”, pre-race training was fine and gave me the rest of motivation for the race on sunday. the legs felt great and relaxed. i was waiting for the battle.

my target was to get my half marathon PB down to sub 80 minutes. after this years rotterdam marathon with a very defensive half marathon split of low 83 i was confident to reach this target. i know the course as it was a regular training route when i lived in heilbronn.

when i went to bed on saturday evening my body reminded me on a infection thats in me and i havent had since i live in ireland – hay fever. my nose was blocked and i had the usual symptoms. sleep wasnt great but i didnt really thought about the problems. i was looking forward to run. 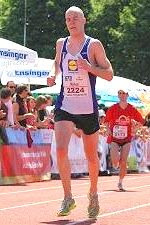 race morning saw 30 degrees celsius (=86 fahrenheit) and no clouds. at the start area i warmed up and reached my block just wright for sound of the gun. the run started and after a couple of metres there was a big group. this group splited after 3k and i was running with the second group. the pace was fine but i started to get problems breathing in. the problem got bigger and bigger. my eyes started to get itchy and i couldnt breath in as normal. the grasses had me and slowed me down. i couldnt really relax and just fought on. it was impossible to hold the speed i wanted to run.

my dad was waiting with the bike shortly after the 18k mark. when i saw him i walked a bit and had something to drink. i was frustrated and disappointed. the midday sun was hitting hard aswell and i continued my little “jog” to the finish line.