Racereport: Hellfire and Brimstone – Wednesday 6 May, 2009 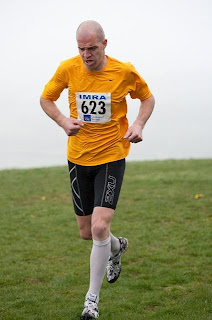 My first experience with hill running was tough as expected. i met up with my clubmate shane and we drove up to the startpoint of the race in the Hell Fire Woods in the outskirts of the wicklow mountains.

a fairly good crowd lined up at the registration. shane and i inspected the course with a little warm up. the first ramp after 400 metres was the highlight and true killer. very steep 250 metres up to the hellfire club.

i didnt know what to expect so i lined up defensively and just waited what´s gonna happen. after a very detailed course description by the race director the stampede was on.

the brutal ramp was reached very quickly. i really had to fight up that steep thing. very hard run through the forest. the ramp ended and the next enemy was the heavy head wind on the plateau. followed by a long downhill the excitment was a mud trail that worked it´s way past the forest and again up and down on slimy trails. really good fun. like little kids playing out in the dirt.

the hill running playground went on and again up to the hellfire club on top of the hill again. i was really struggling. the uphills were alright but the lads where destroying me on the downhill sections. amazing speed by some of the guys. especially on the last steep downhill, the ramp again, i was amazed how fast some guys went downhill. to tell the truth i feared to crash on the rocks so i took it handy.

i ended up with lots of mud and dirt on my shoes and clothes and a brilliant experience. 25:15 said the clock and the result list showed that i came in at 23rd place.

the price giving was in bugler´s pub where i stopped with shane for pints and the usual chit-chat. good day out. see ya next wednesday.