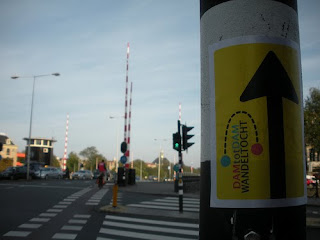 After running in the Amsterdam and Rotterdam marathons I was exited to run in Holland’s biggest road race: the dam tot damloop.
It’s a 10 mile road race that starts in Amsterdam and finishes in zaandam. This year the race had it’s 25th anniversary and to celebrate that the organizers had a special night run set up on Saturday evening. Traditionally the main race is on Sunday morning.

The night version of the race was presented by the well know lunar making factory from Oregon. They made sure that all runners got a fancy purple shirt. 98% of the people were running with it. It was a huge picture seeing nearly 13.000 runners dressed up in the same colors.

My target for the race was to lower my 10 mile pb on that flat and fast course. I read many stories about the race and its history. That made me even more exited beforehand and raised the expectations in my performance. also the idea to run at night sounded nice. The 10 miler was planned to be a “flat out” run for me to get a fast race in before the new york city marathon. I wanted to give it everything. I expected to run in a very fast and competitive field. At least i was hoping for it. I like to have the race scenario – to chase people and to run in groups pushes me.

When I lined up for the race I had a quick look around to check the other runners. I was surprised as I expected some fit guys to show up. The field didn’t really “looked” fast.

The race started of and some guys just sprinted to the front. It really didn’t look serious so I was holding back and just settled in with my own pace. I didn’t really look around and just ran on. I expected some guys to come with me. The route went into a tunnel and it was a cool feeling to run into that long huge tube.

After roughly 2 minutes I caught the first guy. I passed him but he didn’t follow. All of a sudden I had all the police and camera bikes around me. The leading car was also up front. A very unusual feeling in a race for me. I was just expecting some random dudes to come along but there was no one. At the 1 mile mark I had the first look over my
shoulder to check the scenario. I couldn’t see anything as there were also some cars and behind me. What to do? I didn’t really think. Just pushed it and completely enjoyed the unusual attention.

The people beside the road were amazing. Everybody was shouting. I couldn’t really believe it. I was running in Front of 13.000 People surrounded by Police and behind The leading Car. What The fXXX? Am I outer space…

The miles flew buy and I passed the 10 km mark in 37 minutes low. Still no other runners in sight. Still up front and behind the leading car – pure craziness. It’s just a great feeling to lead a race. I probably never ever have the chance to get a feeling like that again. Behind every corner people just shouted at me. People in bars and parties beside the route just ran on the street when they saw the leading car and the police some seconds later it was me passing by. Pure madness.

I was always thinking what kind of feeling it is to lead a race. And then Im in the middle of one of the biggest road races, up front. What a mad situation. 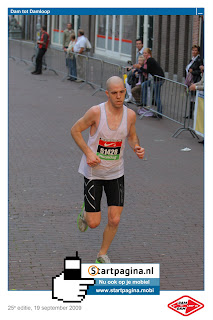 I couldn’t believe that there was no one even with me. The speed I was running at was not crazy. But if you have the chance you have to take it. I took it and enjoyed it. I couldn’t really judge my lead so I was asking one of the police guys to get me my time gap to the next guy. The officer stopped and told me to come back. After a bit he drove beside me and told me he was waiting for 3 minutes and no one came. So he just went on. After hearing that I really relaxed and enjoyed the run even more.

To cruise into zaandam in lead was a pure stunner. The strets were crowded. The people were waiting for the race. And here I am. Tall german dude entering a fun run without knowing it and leading the race home. The noise when I ran through the last gate was something of a feeling. Screaming and shouting everywhere. After a little uphill section I could see the finish line down the wide road. The announcer was shouting my name and I couldn’t believe it. I was first across the line. What to say? Nothing!

The organizers came along and congratulated me. “what kind of feeling is it to win a race no one will never even have the chance to win it again?” he was asking me as the night edition was a once off event. I really didn’t know what to say. I felt kind of sorry. Sorry for my time. To win a 10 mile race in 60 minutes is a joke. Not more not less!

To be honest what I experienced was one of the nicest feelings I have ever had in sports. Since I started running serious nothing came close to what I felt during that run. I know that this wasn’t serious but I know how to rate that thing for me – pure motivation and adrenalin for new york city preparation. in 6 weeks im back to anonymity. not up front and not in the back. Just where I belong as a advanced jogger and not the ” de eerste loper van de dam tot damloop”.

The organizers offered me a number for main race on Sunday morning. I thought of taking the number but then just decided I enjoy the night out as a friend was over with me.

As I would have run the Sunday run I would have finished in 78th place. In this race I came second. Some guy must have started far back and ran across the field. I would have preferred to run against him!

Race Video
Video i know my technique is crap…