“Do not ask – Every time you remind me I can feel the fxxxxxx pain!”. It is a sporadic sight. Seeing Knut harassed and in agony is something that I have not observed often. Well, he looks fatigued sometimes, but pain is not something that one would associate with the GSP’s notorious “Über-Hobbit”. So it is no wonder that a modest sporting undertaking was not the trigger for Knut’s bad mood. Some native jellyfish enjoyed the irreplaceable flavour of raw Norwegian meat as we floated the first 1100 meter swim section headed for Köpstadsö isle during Saturday’s Öloppet.

The spectacular southern archipelago of Gothenburg was our playground last weekend. With nearly 800 teams on the start line, the 7th version of the Öloppet is now the world´s largest SwimRun race. Knut made his arrival quite spectacular. Succeeding some connection dilemmas (Thanks Air Berlin) he finished his day-long excursion with a 11:30 PM entrance into Gothenburg airport the night before the competition. After some hours of sleep we found ourselves on the ferry on the way to Styrsö Bratten. A magnificent Swedish summer daybreak made us forget about the missed hours of rest. Both of us were already tired as child minding in the last couple of days took its toll. However I was worn-out of restless nights with a 10 month-old baby, Knut was fatigued as he took care of Alan, as the two raced and won Breca Buttermere Swimrun a week earlier. 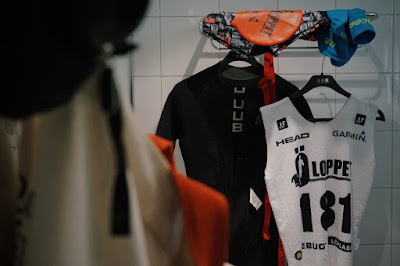 As soon as the start signal rang out it was all disremembered. After a chaotic and rowdy first swim segment we were the second team to reach land. All the other teams behind and in front of us set out on a speedy running pace. Both of us had no interest in joining this breakneck speed. On the first timing mat we found ourselves in 5th place.

As the course took us around technical runs and fantastic sea swims we reeled in a lot of teams throughout the swims but eventually lost ground on land again. Drowsiness catched up on me and Knut started to feel bad with all the jellyfish bites he collected early on. Particularly on the technical running sections across the rocks we could feel that the running form was not at its best. Usually the technical running suits, not so today. The locals catched us and made sure to show us how to bounce from stone to stone. 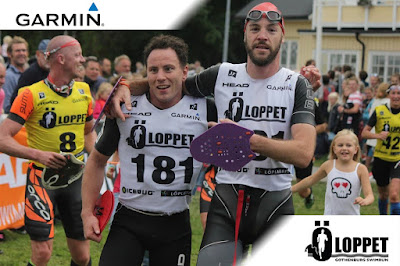 This part of the Swedish Westcoast undoubtedly is special. Two years ago we raced just a couple of kilometres north throughout Petter’s Koster SwimRun (ST). Although I love the local Eastcoast it is at all times something miraculous and remarkable to be here and witness this astonishing nature. Likewise the salt water paired with the shrill and slippery swim exits wears one out. Sun and winds guided us all day and made sure that the swim sections on the very east of the course were, let’s say, entertaining. Moreover Öloppet must have the best crowds when it comes to Swimrun racing. Every Islander got involved and supported as best as possible. So much positive energy! As tiredness set in, this was a highly valued motivation booster.

Our connection-line was as tight as it gets as Knut got all the left-over energy together on the last couple of flat kilometres beside the coast. I definitely was happy when I heard the crowds at the finish line. On Kårholmen I chucked a gorgeous cold beer and this positively helped the mind and the body to speed up a bit more towards the end. We crossed the finish line pleased and in 7th place. Knowing we did not had our best day but also knowing that we left everything out there and certain that this was a good day of physical exercise on the way to Ötillö in four weeks’ time.