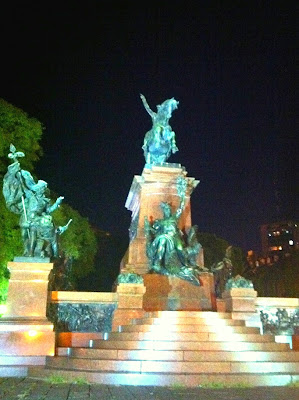 There is no better way to start a new year with a positive experience. After the disapointing last race of 2011 i was craving for revenge.

The XXI Cross Urbano Nocturno 5K was the first option in the new year. I did not know what to expect from the race. The Plaza San Martín, a park in downtown Buenos Aires, was the venue and the race was advertised as a “Cross Urbano” competition.

Argentinas capital is as flat as it gets. There are only minor bumps in the landscape. You can not really call them hills. The Plaza San Martín Park is one of the very few spots in the city where you can find some hills. That was the motivation of the organizers to set up a race on a challenging course. The idea, quite similar to the parkrun one, is great. The simple style organizations makes the race unique and fun. A decent crowd showed up to have a go on the 3 loops around the park.

As the course seemed to be a bit complicated and twisty i got a special guide around by Louis. Louis and i warmed up around the loop and he told me that he just ran a 70 minutes half marathon and competed for the Argentian mountain running team in several competitions around Europe. So i was happy as it seemed that there would be at least some good runners at the startline.

After the “Policía” had a final inspection around the course it was a simple “GO” and off we went around the park. As the race started at 21:30 it was very good to breath and the hot day was just about to cool down.

In the middle of the first long downhill stretch Louis showed me and the other “corredores” why he is in the national mountain running team. He can run downhill very, very fast. So we lost contact to him on the first couple of meters. After 3 loops of twisty turns and some nice stair passages i got rid of the other guys myself and pushed to finish in second place behind Louis.

Great fun for some mid-week racing and good to see that I am still able to run fast if the conditions are right.