The inaugural running of the Clonakilty Waterfront Marathon in West-Cork saw three Germans running and me doing my first road race after the injury. Expectations weren’t too high but the visit of friends from home made the race something special.

After all the cancellations in the last weeks lots of people were keen to race. The Waterford Half Marathon got cancelled as well and so a good number of runners showed up for the 10k, Half-Marathon and Marathon distances. Fabian, Hannes and I had a shot on the 10k.

The weather was cold but perfect for a run. A bit later than expected and unusual for my German friends (so used to on-point start times back home…) the race started with 25 minutes delay.

Hannes was our pace maker and after the usual start hectic we were cruising through Clonakilty. As we were running out of the city towards Inchidoney Island i lost the contact to the leading pack which was down to 2 irish runners, Hannes and Fabian. The boys were in sight but i could not catch them again. I decided to stay with my rhythm and i could see them all the time in front of me. 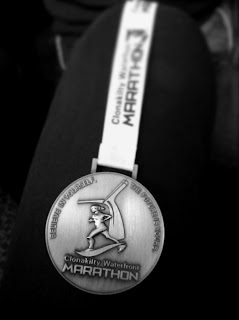 Shortly before Inchidoney Island the marathon route went on straight ahead and the 10k route made a sharp right turn. At this stage i could see that i had a huge gap to the next runner behind me. The 4 boys were still 80 meters up front and Fabian started to test the competition.

When i came to the next junction i thought i had to turn right towards Clonakilty. I asked the marshallls if i had to turn, but they were sending me straight on down the road. I was surprised as i thought to know the course.

After approximately 5 minutes Alan O’Shea, the leader and eventual winner of the Half Marathon, overtook me. Shortly after Alan passed me a car came up and told me that i was on the wrong course. I was angry as i saw that Fabian was on the way to pull ahead of the 10k lead pack. The driver told me to turn around. I never thought things like this happen. But they do.

So i turned around and ran back towards the junction. The race was over for the first 5 men. Fabian looked the strongest and i was angry because he could not execute.

As i crossed the finish line in Clonakilty everybody knew already about the incident. I met my friend Shane and he told me he “won” the race. He did not look happy and gave all his prices to charity. When Hannes and Fabian arrived a couple of minutes later we could only laugh about what had happenend out there. Welcome to Ireland!

All you can eat – я хочу есть