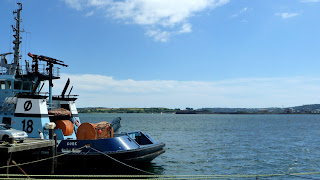 The island is famous for its prison so the well known term “escape from…” was used to give the swim its name.

Not many people escaped the island. In 1921 the IRA prisoner Richard Barrett made his way out of the prison, this sunday Niall O Crualaoich and his family organised a legal island getaway and 35 people were held in custody for a short while.

Perfect conditions made the swim a true experience and the choppy final 500 metres were challenging for everybody.