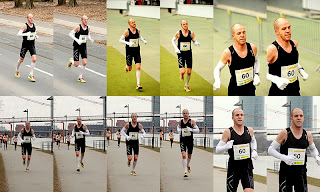 After a short break back home in freezing Germany I made my way to Frankfurt to compete in the 8th edition of the local halfmarathon.

This year the organizers changed the course. The former route was a bit boring but the race itself the first big test for spring marathon runners in the region. The “Waldstadion”, or “Commerzbank Arena” as they call it these days, was the venue for the race.

I registered and was surprised with the bib number I got allocated. The organizers handed me the number “60”. My favorite football club is 1860 Munich so the number is pretty special for me. Good luck for the day?!

I warmed up in the surrounding forest and met some of the Eintracht Frankfurt football players. After their defeat on Saturday they got their recovery run in. No recovery for me. I wanted to get my little “halfmarathon” devil from the shoulder. After the disappointing race in Rome I was so keen to run the 21,095 distance again. I knew that I had a faster time in my legs.

Training during the week went well so I was confident to score fast time. I didn’t know the course but the profile didn’t look to spectacular. The second half had some short but steep climbs in it – nothing major as they were mostly bridges.

The race started in front of the main stand of the stadium. The elite start had a 5 minute head start. Spiridon Frankfurt, the organizing running club, wants to give the local elite the chance to race each other. Surpringsly 2 Kenyans made their way to have a shoot on the 500 EUR the organizers offered for the winner of the race. That wasn’t the intention of the organizers as the women at the registration angrily said. But at the end of the day it is a open competition…

With only a short delay the race started off. On the first few meters there were some twists and turns. It was elbow time as a good bunch of runners went around the sharp corners but after a couple of minutes the course was straight on into the forest. I was in the second group but dropped out of it as the pace didn’t felt too comfortable for me.

I tried to relax and it worked. Despite that I was hitting the kilometer splits a little bit under target. Wind came up and I was searching for some lads to draft. I was running between the groups and was not happy with that. The wind was heavy but not crazy. I just thought it would be better to draft along and safe barely needed energy.

The weather was cold. But despite that I choose to wear a plain singlet and arm warmers with gloves. When I met my parents (thanks for the support) I got rid of my hat. Perfect running conditions despite the wind.

The route went on through lonely business areas and on to the river main. The crowd support wasn’t great. Most of the 667.000 “Bankfurters” must have been in bed at this stage. But I didn’t worry about the crowd support, I was more worried about myself. I started to lose the “comfort zone” a bit early as I passed the kilometer 9 sign at the main promenade. At this stage the eventual women’s winner, Simret Restle, passed me out. I couldn’t respond and tried to hang on.

37:something showed the watch at the km10 mark more less the turnaround point from the river back to the stadium. Still on time and with decent pace I struggled. A bit early. At this stage I had to fight as I had no one to run with. The group in front of me was gone and I just wanted to avoid to get caught. The roads went slightly uphill. It was a constant pressure. I tried to settle back in but it didn’t work. Still pain game – still pushing.

My thoughts just went from kilometer mark to kilometer mark. it worked quite well. I was still moving. I didn’t bother about my splits as we were running out of central Mainhattan back to the forest and eventually the “Waldstadion”. 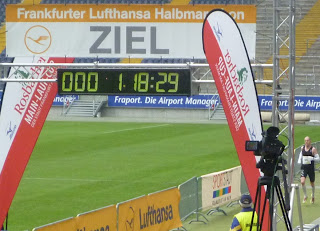 Straight roads were leading the race now. Not the best scenario for me. But what should I have done now? At kilometer 16 there was a turnaround point. When I ran towards it I could see the 2 Kenyans far up front. The field was a good bit back. The way to the turnaround point felt long – really long. And the way back was even longer.

After the long stretch the road turned left towards the stadium. I was pushing hard and started to feel better again. Shortly after kilometer 19 I had to run up a bridge. That thing nearly killed me. The tuff part was the final one around the stadium as I didn’t know where the actual entrance into the ground was.

Finally the big gate came and I entered the stadium. It was a nice feeling to enter the ground. it is one of the best football stadiums in Germany and to finish the race in it was nice.

The clock showed 01:18:32 (46th place overall – 8th AG). Finally a new PB for the distance. Still some improvements to make. The baseline is there now I have to sharpen up for some serious Boston training.