The clock showed 1:21:something. It was the clock at the halfway mark on Pulanski bridge. 21 kilometres into the New York City marathon 2009. 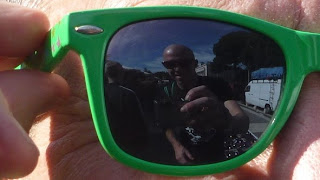 Now the clock is showing exactly the same time again. The sad thing – it is the clock above the finish line in Ostia. Strange but true. No improvement in my half marathon performance. Shocking outcome at the 36th edition of the Roma-Ostia Half Marathon. The Cristoforo Colombo road didn’t lead me to a new PB; it leaves me with bad memories on a performance that was far away from what I expected.

The day began perfect. Our hotel was in walking distance from the Palalottomatica, in Rome’s Eur district. Liam, Eugene, Niall and I had only a short journey to reach the start area. I warmed up and had the usual pre-start preparation. My bib number was 49 and that meant that I was assigned to the elite starting section up front. Enough space to get the last stretches and strides in. No waiting in the crowded start sections. 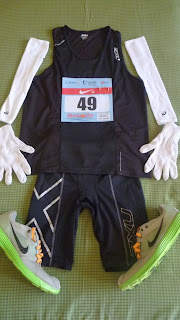 The pre-start hectic was typical for Italy. A pure mess with press and hyper people everywhere. The elite women had a 9 minutes head start (The time difference between the men and women course record). I stood beside the road and watched the girls cruising on towards Ostia. Pretty cool to be in such a close position to the “real” elite field.

Then it was up to the main field and me to get going. I was standing in the second row so it was easy for me to run free straight from the start. After a downhill stretch the road went up again and turned right onto the motorway towards Ostia. Based on the McMilian calculator I should come in with a 1:17 finishing time. Uli and I agreed to shoot for that. I was confident to get the time. Training went well despite a busy week at work.

The first split I got was the one at 2k. It was bang on. So I stuck to that pace and tried to find my rhythm. I couldn’t find it all. Couldn’t hold the group and couldn’t settle with the pace. The first part is a tricky one. I never felt comfortable and relaxed. I couldn’t manage to relax my legs on the downhill sections and the uphill stretches killed me. Beside that the wind caught me all over. As I didn’t have a group to run with I was mainly on my own and the breeze from the sea was a tough one – too tough for me! I suffered badly and couldn’t stick with it mentally. Shortly after the 9k sign I looked up and far, very far, away I could see the sea. Tough going. 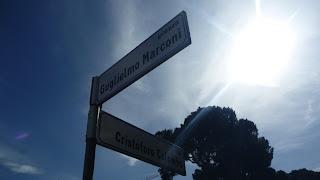 The course is not spectacular at all. A straight motorway that leads towards Ostia. A little out and back beside the sea and you are there. I arrived in Ostia as a mentally broken man. The turnaround point at Km19 on the promenade was another crucial one. You’ll get hit by the head wind. And there was some wind. So still tough going. I reached the finish line and was without any energy. I suffered a lot for a disappointing time.

But no time to complain. This race was just another step towards Boston. Let’s Hope the 1:21:something remains – as my split time during the second half of the Marathon!