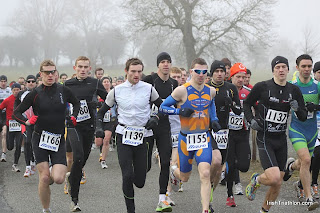 By now the Naas Duathlon is the traditional season opener for me. Since I came to Ireland 3 years ago I always raced at least 2 races of the Duathlon Series.

The course is tough but fair and the organization gets better with every year. The only thing the organizers, the Naas Triathlon Club, cant influence is the weather. Last year the first Duathlon was canceled and a 11k run race was the option for the day. This year the roads were not frozen but the overall temperatures were crispy enough with very chilly 3-4 °C.

I cycled the 20 minutes from my house up to the race venue at Punchestown racecourse. It was a very misty morning and the mist shouldn’t leave for the whole day. 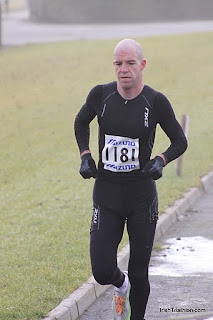 Triathlon is one of the fastest growing sports in Ireland and the UK. Knowing that, the transition zone was crowded as never seen before at that race. Duathlon is the perfect winter training for Triathletes so this sport gains his bit out of the boom. 3 years ago it was no problem to find a decent place for the bike but nowadays the place is jammed. Roughly 250 peoples wanted to get the legs turning.

As I changed to running only I didn’t know what to expect from the hilly 20k bike part of the race. The only time I touched my bike was for some recreational spin on the home trainer. Nothing serious – no intervals – no program just up to 45 minutes in low gear to keep the legs turning. On the way to the start the legs felt OK. I was hungry to race.

The crowd lined up just beside the main stand of the Punchestown Racecourse and there was no hang around at the start. The gun sounded and the race was on. I was in the 8 man leading group travelling in a pace that felt OK. One guy attacked just at around 1,5k into the 3,5k running part. The group got blown into pieces. I couldn’t hold the pace and was running on my own. I entered the transition zone relaxed, curious on the bike part. Changed my shoes in seconds and put on the helmet fairly quickly. At least I didn’t forget how to change. 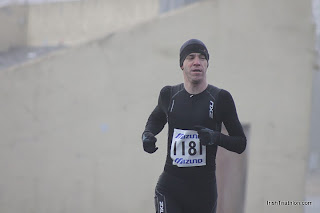 On the bike I tried to ride in low gear to get the legs warmed up and tied in. When I tried to put on my second shoe the lace flipped out so I had to cycle the 20k without the laces – not a real problem. Right from the start I felt that I can’t cycle a hard 20k. I just don’t have the power in my legs to go out hard on the bike. Two guys passed me and I didn’t respond. It just didn’t feel right.

At the turnaround point in Blessington I was roughly in 15 place. I didn’t try to get the other guys as I didn’t had the power. The course is tough so I decided to hold on and wait for the bike. I always finished in the Top 10 so my main goal was to get a place in there again. I was confident to catch some guys on the last run.

Shortly before I entered transition zone I got caught by a group of 20-25 guys. Sunday group ride or what? I was shocked. I never saw such a bunch of drafters in a race in Ireland. As they were flying by I got passed out by some guys of that peloton. Couldn’t really respond and was pissed of big time. Another argument that ties me into that running thing even more.

Pissed of as I was I went out on the last run and just tried to run as hard as I could. I was worn out so the last lap was a hard one.

Overall it was nice to get a race in and Duathlon is definitely good fun. A tough, but exciting sport. With better bike legs I wouldn’t got into the trouble with the peloton people so I have to blame me first before I go back to them.

Yeah I’m out that Brooklyn… again!

RUNSSEL MOVIE MONDAY: Those were the days – High Altitude Training in Kenya