On Point with Robbie Lawless aka Runtramp

A lot of information is available about running and the so named „skyrunning“. Trailrunning is the current top seller and the latest jogging chique. Without a doubt, this sport generates a matchless vibe that is intriguing.

Not many writers bring this vibe across in a precious approach. From the time Sweden based Irishman Robbie Lawless put his Runtramp project on the loose and since he offers his constantly interesting, unique and well thought out athlete portraits via Brian Powell’s irunfar.com, he is a household name for any quality feed that is out there.

Gratefully the Wicklow man responded to some questions for this petite division of the glorious interweb. This gentleman in fact got style.

Me: Whats your sporting background?

Him: I loved running around as a kid, just trying everything really, depending on what was ‘in’ at the time. The first sport that became an obsession for me was cycling though, when I was about 13 years old. I had absolutely no interest in team sports or the camaraderie that went along with them, so cycling seemed like the ultimate ‘loner-sport’ for the shy young-fellow that I was. I remember getting my first job with my Dad, who is a tailor and pattern-maker, and getting paid about the equivalent of €50 for a 40 hour week, slaving away carrying rolls of heavy fabrics up endless flights of stairs. I saved every penny of my ‘wage’ and bought my first road bike, which was a Raleigh Banana, not the expensive model but the team replica if I remember correctly — a lovely black and yellow colour. My Dad made me some lycra cycling clothing to match the bike colour and I used to take epic solo spins up into the Wicklow Mountains, near where I grew up in Ireland. I’d be gone the whole day at times, easily 6 or 7 hours. Those were great days, each one of those rides was a mountain stage of the Tour de France in my imagination — I raced all the greats of the time; LeMond, Kelly, Delgado, Roche, Fignon and, inevitably, broke them all on the final climb to clinch the polka dot jersey — I never wanted the yellow, the ‘king of the mountains’ was what it was all about. Cycling made way for surfing when I was around 15, after I was taken on a surf trip to the West Coast of Ireland and that ruled my existence for many, many years. In surfing I had found, not only the activity that I loved, but the lifestyle too. Surfing in Ireland back in the early nineties was a long way from the Californian stereotype — there were probably about 100 surfers max in the whole country, it was cold, bleak and it was a proper counter-culture, very underground. People didn’t like surfers, they thought they were a bunch of long haired, drug-taking wasters…which wasn’t so far from the truth really. I wholly immersed myself in the culture of surfing — I moved to the Atlantic Coast, bought a mobile home that I lived in and just surfed for two years. That was when I was 16 or 17. Through surfing I started to swim more, to build up fitness when there were no waves and I’ve swam ever since — I still do 3 or 4 pool sessions every week, it’s like my meditation. There is something so nice and familiar of just doing lengths of the pool for me now, after 20 years of doing it, it’s like putting on my favourite pair of slippers or something. I used to run a little cross country in school but, at that age I didn’t really get it, didn’t understand the attraction. I started running again in 2000 with my best buddy, an Australian by the name of Craig, we used to run together a couple of times a week, talk about how we were going to change the world and slowly speed up as the competitive juices started to flow…by the end of each run we’d be literally sprinting for home. Then we’d go and drink beer afterwards. They were good times and I realised that I wasn’t too bad of a runner. It was enough to plant the seed and, slowly at first, then rapidly, running consumed me. Now, I run everyday, write about it, think about it, sometimes dream about it… 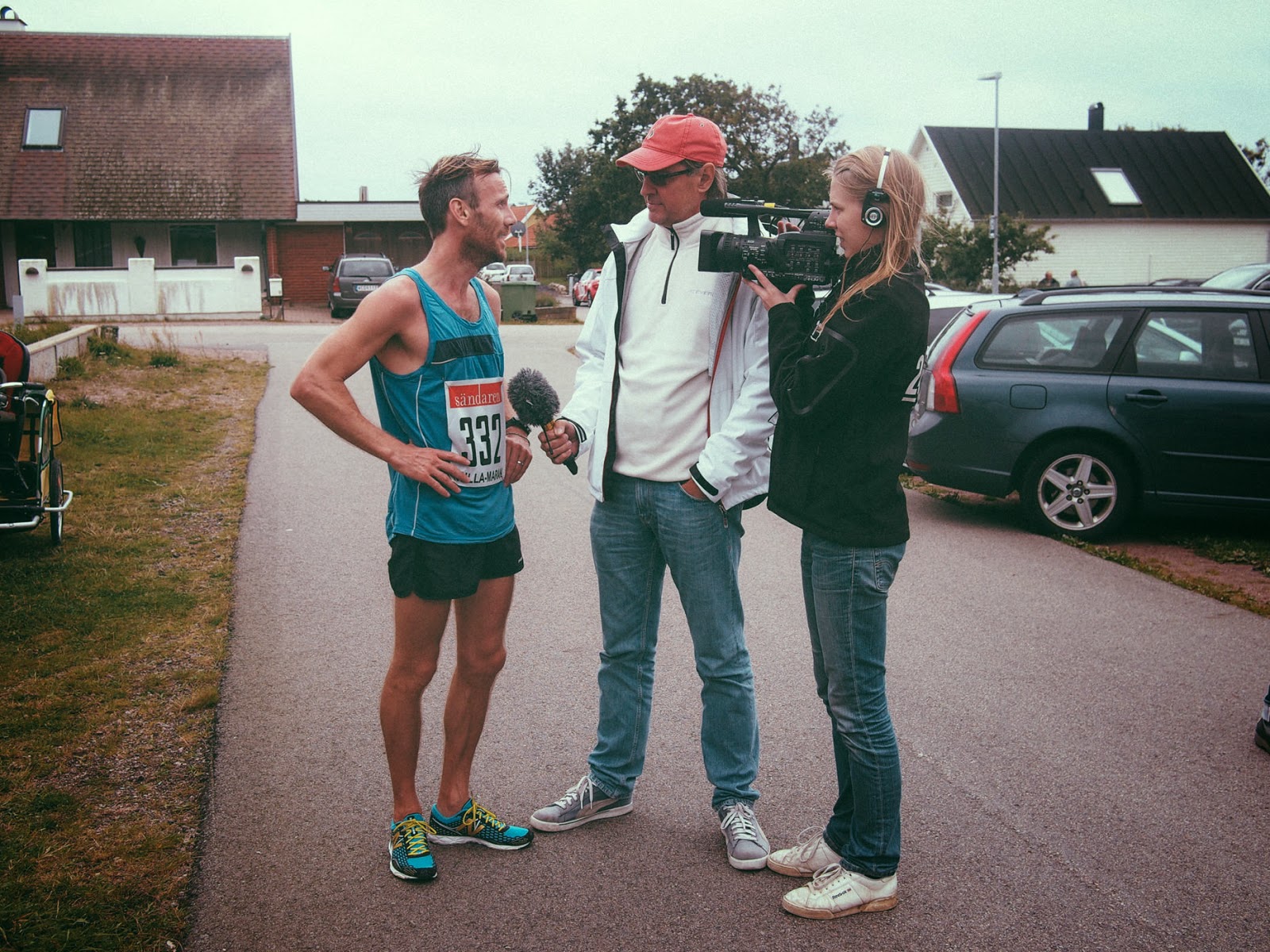 Me: Why running? Why sky running?

Him: Running is magic. I mean the ‘feeling’ of running well, feels like magic. Only a runner knows that feeling, though. Non-runners primarily associate running with pain and suffering…there are elements of that too, of course, but, for me at least, running is something that, overwhelmingly, means joy. I love everything about it, all the little things…it’s an amazing way to travel, to move. I love the sound of my stride, the rhythm of it. The sound of my breathing. The way on a really still, windless day, that you can create your own personal breeze just by the movement of your body through the air — how cool is that?! I like the purity of running, the simplicity…Skyrunning, and trail running in general, is like taking all that I love about running and enhancing everything — turning every sensory, physical and emotional dial up to ten. There aren’t many things more awesome than running over mountains. 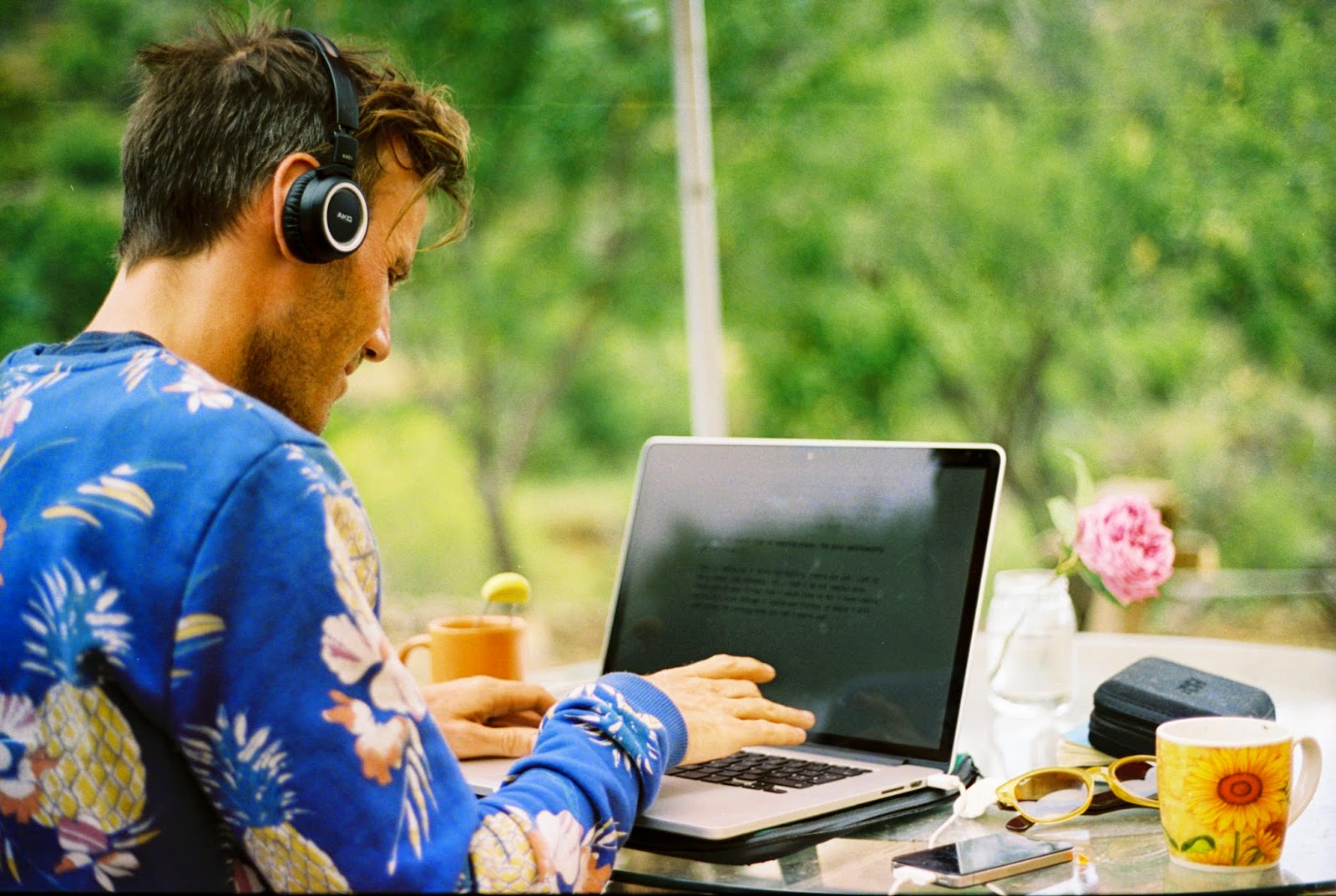 Me: Why did you set up RunTramp?

Him: Curiosity. I love finding out what makes runners tick — what journey they’ve taken to become who they are or why a designer created a certain running shoe or piece of clothing like they did. I have a genuine interest in both the nitty-gritty and the most mundane, left-field aspects of running. Results or achievements don’t really do it for me. I want a good story, a good running story, that’s what I aim for. I love writing too, of course, and design. I design a lot of websites for people and I thought it was time to do one for myself, how I wanted and not having to stick to someone else’s design brief. I wanted to make RunTramp as simple as possible with a focus on the content, making the articles and text look as nice possible, so people could read them easily and enjoyably. I still spend hours fine-tuning things on RunTramp, becoming obsessed with the smallest detail and spending hours changing the code to get it exactly like I want — things that, more than likely, nobody will ever notice. But it’s really cool to see that people enjoy the articles and seem to like what RunTramp is all about. 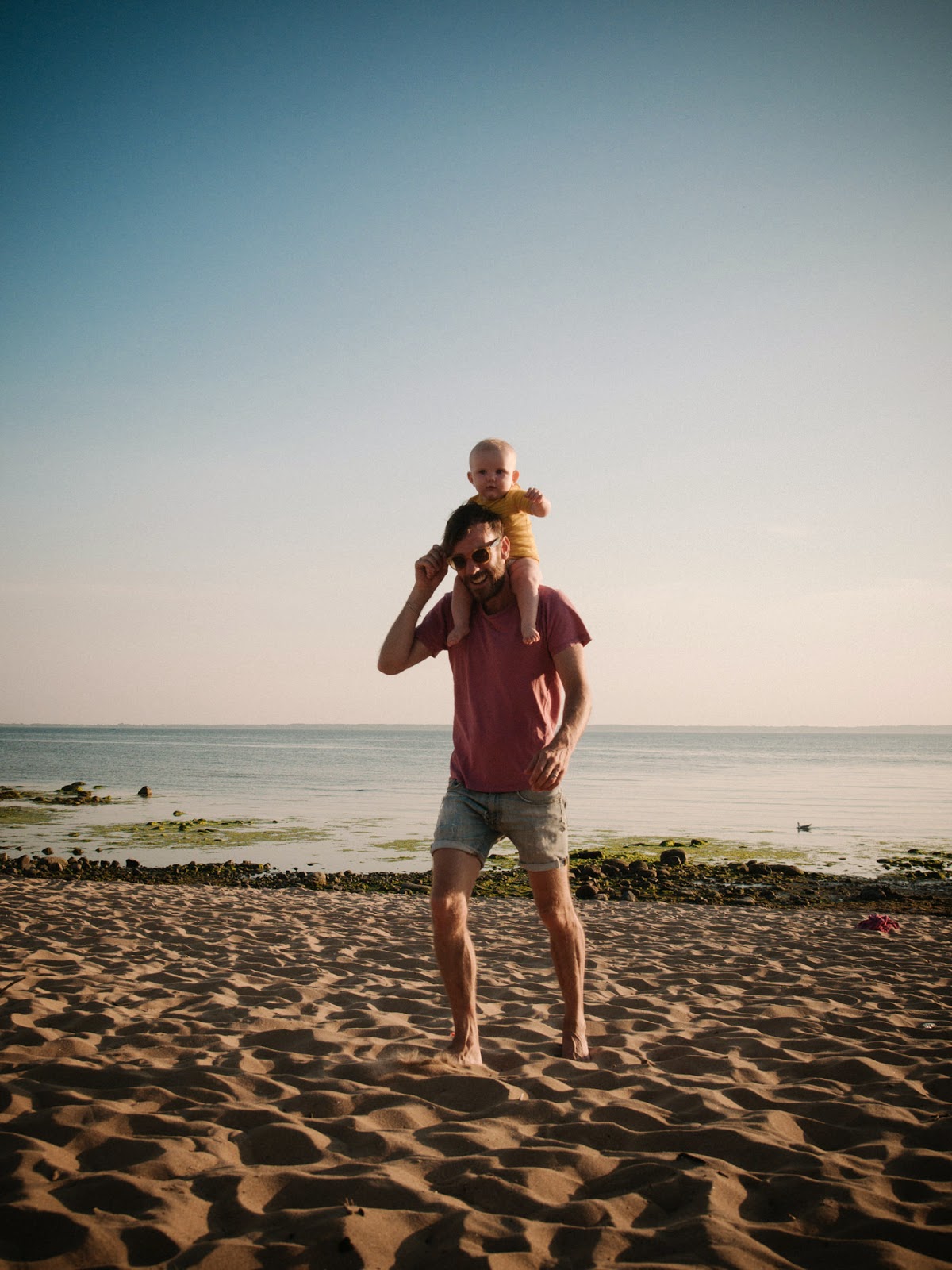 Me: Which sporting person inspires you?

Him: I guess what really inspires me is anyone who is purely passionate about something — that could be in sport, art, writing, cooking, gardening….whatever. The outlet isn’t that important, it’s the passion that’s inspirational. I’m talking about people that are off doing their thing and aren’t chasing recognition, slaps on the back or financial gain — they’re the ones so engrossed in their chosen lifestyle that they’re not consciously trying to inspire others. To me, that’s the coolest. My wife, Linn, also inspires me continuously — she’s like a bubbling brook of inspiration. An amazing person to experience life’s ups and downs with. 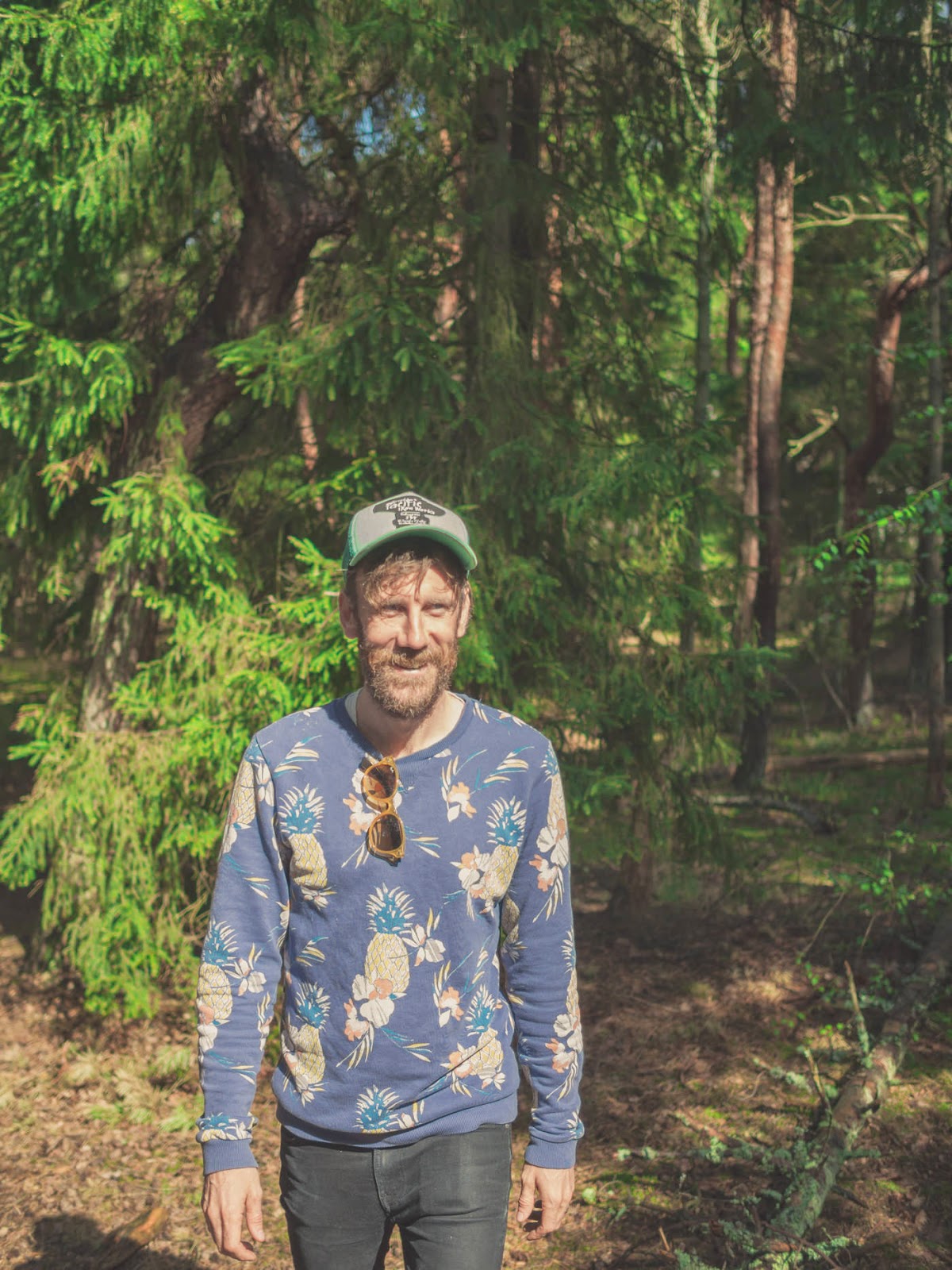 Me: Which tune do you currently have on repeat?

Him: The summer has been pretty tune-free actually — unless we take baby songs into consideration. My ten-month old daughter, Eva, got a CD of ‘alternative’ Swedish baby songs called ‘Minitrams’ by a guy called Dan Bornemark, who is the son of a famous kid’s songwriter called Gullan Bornemark here in Sweden. It’s so addictive, resistance is futile…once those songs take seed in your brain, it’s all over. There’s one song called ‘geggamoja’ that’s really, really catchy. It includes the line ‘Pappa talar flytande geggamoja’ which can be roughly translated to ‘Dad talks a load of flowing crap’ — which is not too far from the truth.