On point with Nadja Odenhage

Stunning sport produces spectacular pictures. One name that is heavily connected with remarkable Swimrun images is Nadja Odenhage. Based in the Dalarna region in the middle of the picturesque Swedish forests Nadja produces photographs of Athletes that do stick out and transfer inimitable feelings. Endurance and adventure sports of all kinds are where she sets her marks. I catched up with her to find out more about her work and drive.

Runssel: Since when do you take images professionally? When and why did you start?
Nadja: I started back in 2012 after an injury that kept me away from doing sports myself. Some months after I got hurt I got granted a studentship called “Scandinavian photo scholarship”. At the same time, Mats Skott rang me and asked if I would join their ÖTILLÖ media crew. I loved the idea and subsequently teamed up as one of two photographers at the ÖTILLÖ media crew. I’ve been working professionally since.

Runssel: You have been involved in adventure sports for quite some time. What is the magnificence in capturing these sports?
Nadja: The outdoors! The nature! The shifting weather that produces thrilling conditions and of course the hard working athletes. The combination is magical and keeps me motivated and fascinated.

Runssel: Besides Jakob Edholm you have been on the forefront of SwimRun snapping. You seem to capture the spirit of the sport in a very special way and certainly motivate people to go out and try this sport. Where do you see the speciality of the sport and what does it take to capture it?
Nadja: Thank you! I believe I’m intrigued by understanding the athletes, and by that also understanding the sport. Trying to be one step ahead and knowing where to find emotions and expressions. There is also an intellectual viewpoint. In SwimRun, the team of two adds something unique to the whole performance. There seems to be an extra dimension.

Runssel: Which camera set-up do you use while covering a competition? In what way do you pre-check the course? What complications do you face generally?
Nadja: I only use Canon. There’s no time to mess around with gear so I usually bring 3-4 fixed sets of cameras. For example one 7D with a wide-angle like EF 16-35mm f/2.8L III USM. One 5D with an EF 24-70mm f/2.8L II USM lens or an EF 70-200mm f/2.8L IS II USM lens depending on the type of competition and situations on the course. Unfortunately I also carry a pretty heavy underwater housing. Ikelite with a Canon fisheye EF 14mm f/2.8L II USM is my type of choice. It is great to work with but pretty heavy while climbing around of course. A flash is useful for the longer races that start before sunrise and end long after sunset.

I use Salomon or Icebug shoes like the Swimrunners i capture. Further than that fast drying clothes (Tierra is my favourite) and quality wool outfits (I like Icebreaker and Woolpower) keep me warm and comfortable at work. I end up muddy and wet in every race. Similar to the athletes I pretty much swim with my clothes on. I want and I need to dry up as fast as possible. I know my colleague even change to a wet suit for under water shots. So far that is where I draw the line.

It’s a challenge in itself to keep the equipment minimalistic as we do carry all our own kit around of the course. My absolute hero is my F-stop backpack.

It’s a very good idea to invest time in any kind of course pre-check. Detailed or not, but you need to know the sunlight and the estimated times of the athletes on race day. If I’ve been on the location before I’m wiling to try out new approaches and so on. It makes the race day a lot easier and the pictures way better. We have been lost some times and that is not what you want…

Being on the course beforehand is a good way to match logistics, knowing where to drive, where to swap vehicles, where to climb, where the boat can find me on a particular island and agreeing on an overall plan with the rest of the media team. Especially on a long and logistically difficult race like ÖTILLÖ all of the points mentioned above are very important. On other races, when I’m going solo, there are different kinds of issues. Sometimes it feels like i need to split myself in halfs. Races like Koster Swimrun or Ångaloppet are very hard to cover as i need to be quick around the course. The hardest part seams to be the faster and faster Swimrunners. All the records they break also break our schedules!

Runssel: What has been the most extraordinary area you had the chance to take pictures off?
Nadja: Lofoten! And the first time around the ÖTILLÖ course in the Stockholm archipelago was amazing. The sunrise paired with the autumn – Pure Bliss. But the first time in any race is so much fun. You never know what is waiting for you. The peaks along the Engadin valley paired with the clear mountain lakes, the rough ocean and the fascinating Scilly Islands. The dark forest at the ÖTILLÖ 1000 Lakes, the marine reserve at the Koster islands and the midnight sun of Laponia – all wonderful and very special places.

Runssel: What outlines a blameless image for you?
Nadja: Umm, blameless tend to be boring. The more perfect the less interesting I guess. Extreme sport and rough nature helps. I like emotions, expressions, situations and movements.

Unperfected is fun! Like the one below. It was taken during last years Sprint race at the ÖTILLÖ Engadin race. 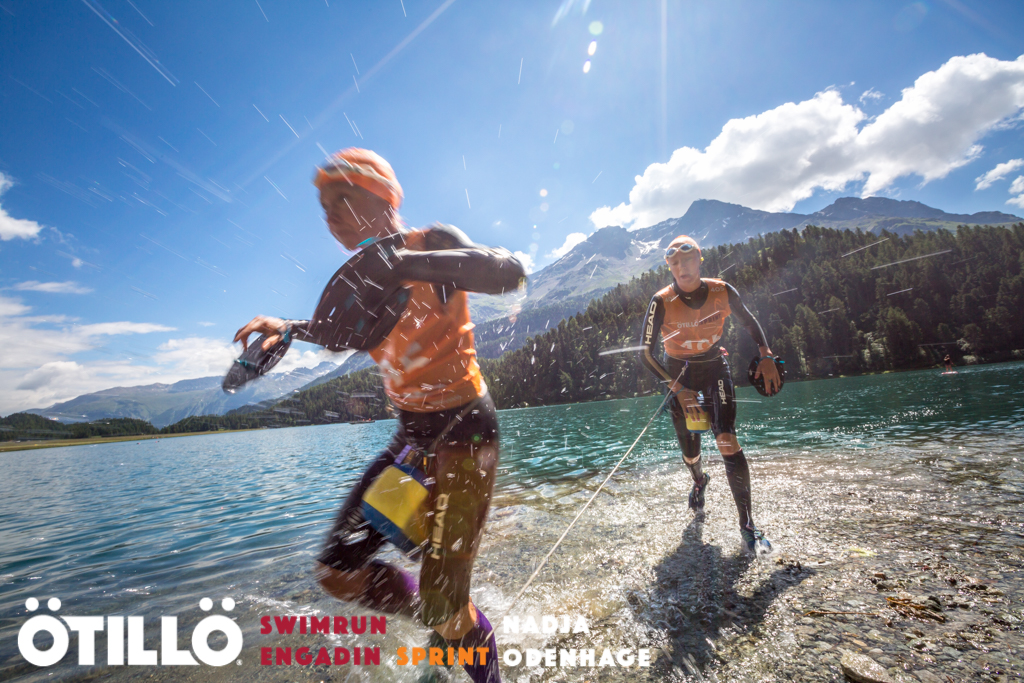 But yes, beautiful features can involve perfect natural lighting paired with natural framing. Like the Reed picture from ÖTILLÖ 2015. 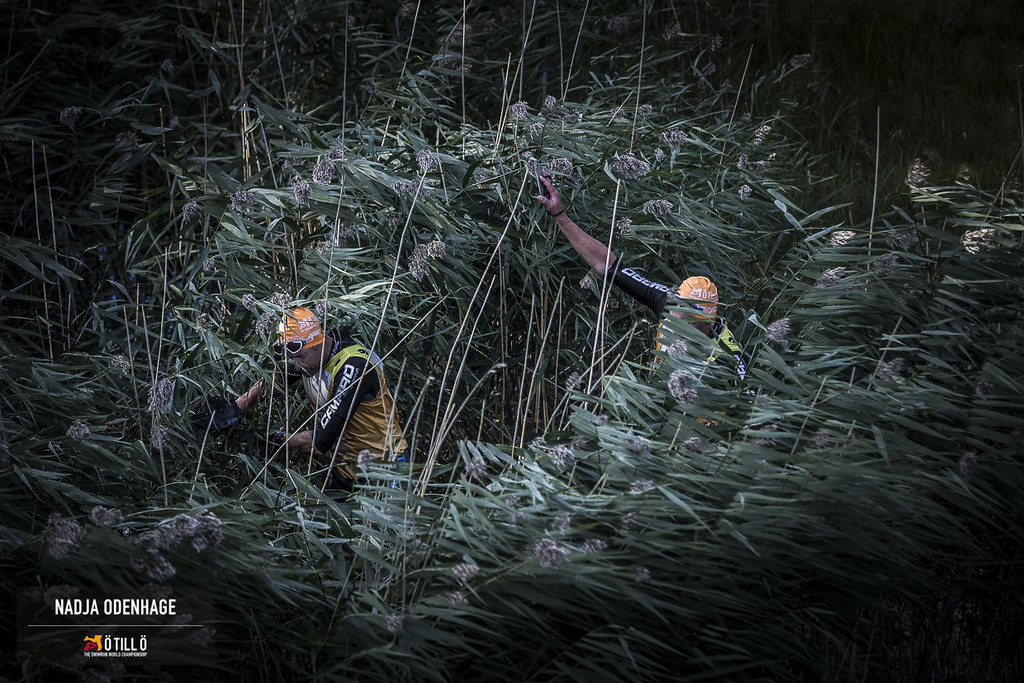 And being there when it happens. Some things can not be planned. For example a spontaneous kiss on the race course. 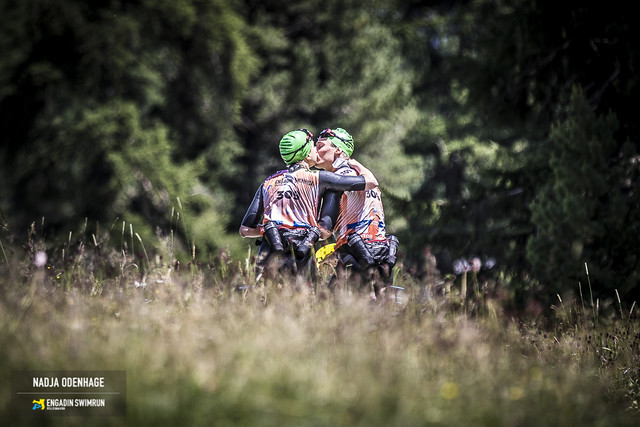 Or that backflip from Koster Swimrun in 2015 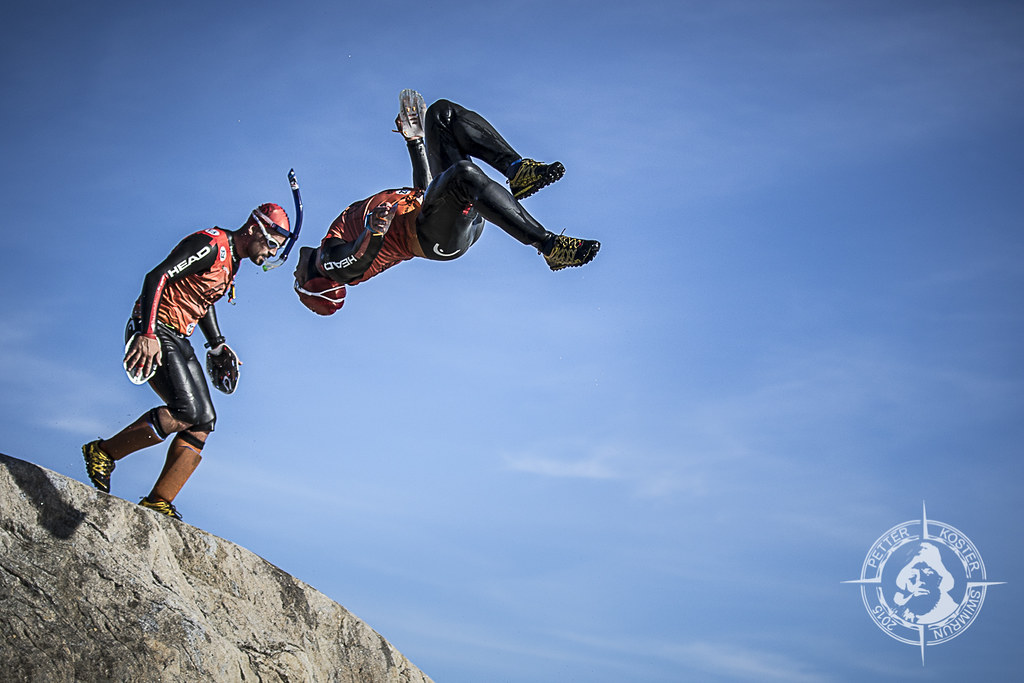 Runssel: Do you have other photographers that inspire you?
Nadja: Yes, many for different reasons. For example Annie Leibovitz, Delly Carr, Jody Macdonald, Emma Svensson, Jimmy Chin and my Danish friends at Rebel Media House and Martin Paldan.

Runssel: Which races will you be covering in the 2017 season?
Nadja: I will not be at the ÖTILLÖ SwimRun series this year which gives me the opportunity to follow through a couple of projects as well as new partners. I’m really looking forward to this year even though I already know that I will be missing out on some great adventures with ÖTILLÖ. It’s a great crew, and I know they will have a very special year with lots of spectacular news. My list of races tends to get clearer as we move closer to race day.

Runssel: What would be a race you would love to cover and why?
Nadja: I’ve got a bucket list of course! But yeah, the last remote race in Patagonia would be a true challenge – Patagonia Expedition Race and perhaps competitions like Dragons Back Race in Wales or why not a year long documentary of a SwimRun team.