On point with Calum Neff

Running a 1:11:27 Half Marathon is pretty impressive. Doing that together with your 11 Month old daughter is something that is really unique and also the stroller half marathon Guinness world record. 31 year old canadian Calum Neff just stormed to the overall victory at Saturday’s Katy Half Marathon in Katy, Texas. Pushing his youngest daughter all the way to the finish. Some performance! I caught up with the Canadian living in Houston for a quick chat about his race and running with his daughter.

That was some pretty remarkable running you revealed at last weekends Katy Half-Marathon in Texas. Pushing your 11-month-old daughter to a 1:11:27 Half is genuinely fast. Was she scared?

Thank you, I think I was the scared one! I was so cautious of not hitting a cone or tripping up! Holly was loving it, her little arms were waving around and clapping, she basically only says “dada” and a few other words so the rest was babble. When I push my eldest her long hair blows up over the stroller- put the two together in the double and its the greatest view ever. Holly is so happy, peaceful, and continent- her grandparents call her the Holly-lama, never met a kid like her that wakes up with a smile everyday, a perfect running partner. 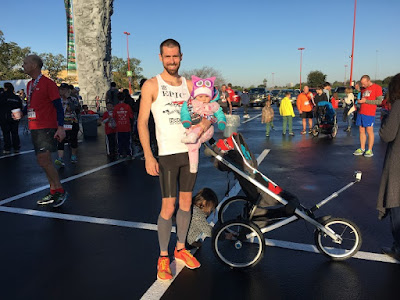 Leading up to the competition how did you merge stroller runs in your training routine? Was there any distinctive preparation?

I have spent the last 5 months completely focused on Houston Marathon training which happened three weeks ago (January 17th). It didn’t go exactly how I wanted with my hamstring tight and cramping on me. I was only 20″ off last years personal best of 2:22:59 and overall felt amazing even after coming through half in 1:09. So I know I’m in great shape right now. During Christmas I had the girls out in the double stroller to see the neighbourhood Christmas lights, we would bring along a Bluetooth speaker for carols which was a lot of fun. Tapering and recovering from Houston allowed me to get the stroller out a lot more, especially to test out the new Thule Glide stroller which was great compared to the double which we got from a garage sale! I’ll usually run to the track with the stroller and let the 3 year old run around while I do a workout, we did a few quarter repeats with the stroller and I usually take a bayou trail home if its dry. On longer days I’ll pick out a new park to go play at and we’ve even brought fishing poles along on one run! Even in Houston you can find nature and adventure which is part of what this whole record was about, get outside with your kids! 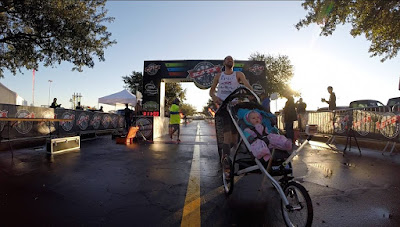 Now that you set the unofficial half-marathon WR with a stroller will there be an attempt on Michael Wardian’s Marathon stroller WR (a wicked 2:42:21 ran in 2007) anytime soon?

I’m just getting the Guinness evidence submitted this week which is substantial so I expect this to be official soon. Yes I think I have a good shot at sub 2:30 so I just need to figure out the right place to do it (I would LOVE it if Houston let me race with the stroller but I believe its against policy (I’ll have to take the race director out for some beers). Wardian ran 2:42 at the Frederick Marathon. Interesting note, he later had a stroller-dual with Zac Freudenburg in 2009 at the Route 66 marathon where Zac ran 2:32:10 but must have not had enough evidence or a rule was missed for Guinness. Either way I would like to go under 2:32. I just found out about Kris Houghton running 1:12:11 in 2013 so I’m happy I was well under the “official” record. 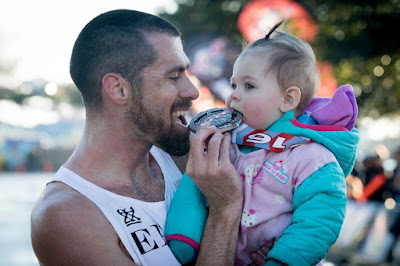 What is the trickiest part of running that fast pushing a stroller? Do you have any tips?

Finding the right stroller has to be one of the most important- there is nothing worse than a stroller that doesn’t track straight and drifts left or right, speed wobbles are also no fun. The Thule Glide has amazing performance with lots of nice features. I think a lot of people think they have to be straight behind the stroller with two hands at all times, feel free to move left or right- if the stroller tracks straight you don’t even need to touch it sometimes so your form doesn’t have to completely change if at all. Keeping the kids happy requires many tricks, we don’t bring a tablet but the music is fun, snacks and drinks are great especially when they share! Thankfully very light wind on Saturday, nothing worse than running with a stroller in the wind so I can’t help there. 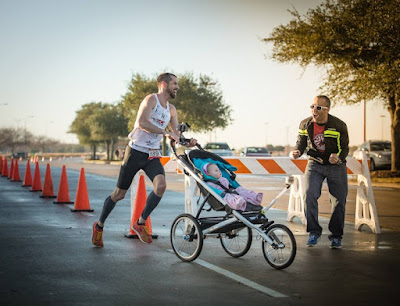 Which stroller model did you use and why? Did you make any special adjustments and what shoes did you use?

As mentioned we used the Thule Glide. I was looking for a stroller with a fixed front wheel (even the ones that have option of locked and swivel I find drift too much), large wheels, light weight, and the adjustable handle is great too. The harness system is very easy and safe which was my main concern. Guinness rules state the stroller must be stock commercially available with no modification so this was straight out of the box except for adding camera mounts. I run on the Altra Endurance Team and my go to shoe for racing is the very light One2.5, the zero drop (heel and toe height is the same) has helped keep me injury free the last few years and with a foot shaped toe box my feet are stronger than ever and do not show the wear of a distance runner at all. 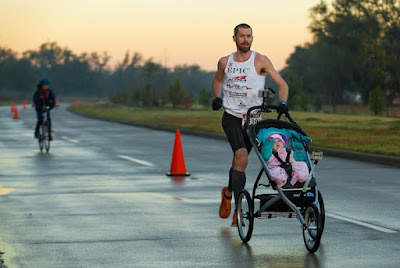 What is on the racing itinerary for the rest of the season? Will there be another shot on your marathon PB after your 2:23 in Houston early in the year?

I love to race so my calendar is always full with everything from one mile to ultra distance on any surface and terrain. I’ll be doing lots of the Trail Racing Over Texas events this year, some really unique trail runs around the state including one in the US Sky Running series. I’ll be in LA this weekend to watch the US Olympic Trials and run the LA Marathon on Sunday, more for fun but if I’m feeling good I will get after it. I want to take a shot at the Canadian 50k record and national championship, and the next goal race for me is the Wings for Life World Run where I will race at the Niagara Falls, Canada event in May going after 70+ kilometres before being eliminated in the unique race format. 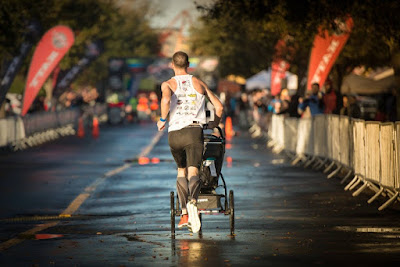 Which team is going to win the Stanley Cup?

Ah man, I’ve been out of my Canadian roots too long but I will always say the Toronto Maple Leafs! 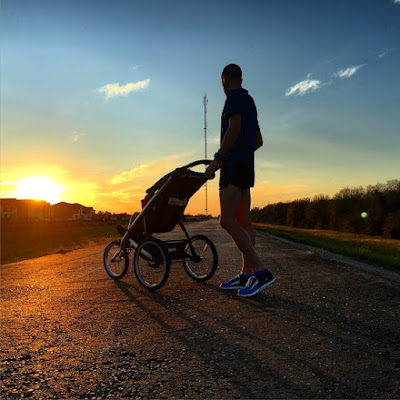