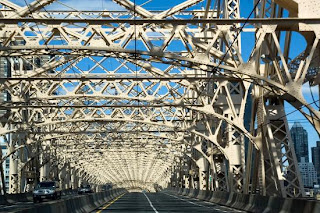 At 13.1 miles, runners cross the Pulaski Bridge, marking the halfway point of the race and the entrance into Queens. After about two and a half miles in Queens, runners cross the East River on the Queensboro Bridge into Manhattan. It is at this point in the race when many runners begin to tire, as the climb up the bridge is considered one of the most difficult points in the marathon.

The Queensboro Bridge is a double cantilever bridge, as it has two cantilever spans, one over the channel on each side of Roosevelt Island. The bridge does not have suspended spans, so the cantilever arm from each side reaches to the mid-point of the span.

The bridge has two levels. Originally the top level contained two pedestrian walks and two elevated railway tracks (as a spur from the IRT Second Avenue Elevated Line) and the lower deck four motor traffic lanes, and what is now the “outer roadway” and pedestrian walk were two trolley lanes. A trolley connected passengers from Queens and Manhattan to a stop in the middle of the bridge, where passengers could take an elevator or the stairs down to the island. The trolley operated from the bridge’s opening until April 7, 1957. The railway was removed in the late 1930s and early 1940s as well as the 2nd Avenue Elevated Line. The trolley lanes and mid-bridge station, as well as the stairs, were removed in the 1950s, and for the next few decades the bridge carried 11 lanes of automobile.

I´m feeling so NYC these days…