It seems to be hippest thing in these days – compression wear. Beside the most famous compression socks user around, paula radcliffe, it started of to get kind of triathlon mainstream just 2-3 years ago. As usual the triathlon scene is more open to new trends and to convince a triathlete to try a new product is way easier than a runner. As you watch an ironman it seems to be that nearly every third person wearing at least compression socks.
One of the first guys around racing the white long socks in a triathlon was new zealander kieran doe at the challenge roth 3 years ago. Everybody was wondering and just thought it’s a “fashion statement” from the dreadlock super swimmer – it was definitely not. 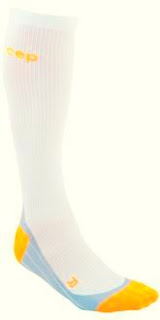 The hype went on as guys like timo bracht and pete jacobs used the ugly looking socks just the year after at the races in roth, frankfurt and hawaii. The spandex socks became popular and if you watch running road races around the globe you can easily spot the socks in nearly every competition these days.

So what are the great benefits of those socks in a usual training week?

My only experience to compression socks goes back to days in the hospital. Once on the legs you needed a well build nurse to get rid of the heavy socks.
I was trying the CEP model on plane journeys several times and I liked the fit and quality. To wear the socks with a short in public would have never been a choice for me. Last weekend it had an end.
As I was facing a high mileage weekend I said myself this is the time to get the test done.
For my run last Saturday, a hilly 17k with 10 x 80m hill sprints at the end, I was using the 2XU calf guard. During the run I didn’t feel any difference. At the end the calf’s were still relaxed and so the hill sprints went pretty solid.
I couldn’t judge now if it was the calf guard or just a general good feeling at that day.
As I went home I used my CEP model for recovery during the night.
Sunday saw a 38k long run and me using the CEP out for that run. As I experienced on previous runs in the last couple of weeks my calf’s just get a bit sore after 2 hours. Not at this time. I was relaxed and the socks seemed to support my muscles. After more minutes in I also used them to cool my calf’s as I was dashing some water on them. Till the end of that easy run I had a good feeling.
Monday, after a weekend with 55k, I was a bit tired and my legs felt heavy. I decided in the morning to put my second pair of CEP socks on and use them as recovery for the day. When I came home in the afternoon I was able to go out for easy and relaxed 40 minutes. 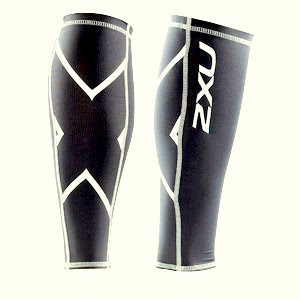 So what is the summary of that test? hard to say in general. It’s definitely not a disadvantage to wear compression gear – that’s for sure. But is it really hard to judge if it gives you a boost and an advantage in a race. I would go on and use the gear in training, especially for long runs.
For me the big advantage comes in when the sock gets used for recovery. It definitely helps me.

if you´re keen on a nice test just have a look HERE.

Lunar Racer: Black is back