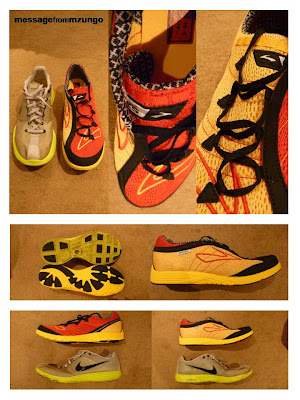 It was about time. It seemed as if no one wanted to chase the leader. No one even tried to catch the current Über-shoe on the competitive road running market, Nike’s Lunar Racer.

Currently, I am sporting my fourth pair of Nike Lunar Racers. Stuck with the first generation, I am a totally happy user of Nike’s groundbreaking Lunarlite technology. Finding a light shoe that provides me with superb cushioning and such a dynamic handling was not easy. I’m completely satisfied with the Lunar racer. I like the look of
the shoe and the overall performance. It’s the ultimate partner for me, from easy morning jogs to long runs, from the 5k to the Marathon.

A couple of weeks ago, Brooks released the first serious Lunar answer – the Green Silence.

Silence? Where is the silence? And where is the green? The shoe doesn’t look silent or green at all. The very aggressive colouring makes it a true “in your face” racing flat. A shoe you want to wear. 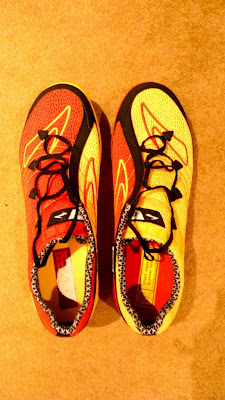 On the left side it sports a yellow sole, on the right side the sole is red. Also, the colour of the upper is different from left to right. It’s an eye-catching mix between the famous “Hanson’s” colors yellow/red paired with a bit of black trimming. This look is hot. There’s only one thing you would want to do with these shoes – run fast!

But let’s have a closer look before we hit the road. Sticking out is – no pun intended – the tongue. Forget about the tongues you know, the Green Silence’s is different. If you are by now used to a slim and skinny lunar racer tongue, you will face a completely different approach. The tongue forms part of the actual shoe instead of being separately stitched in. Together with the crooked lacing, it definitely catches the eye first. All in all, the shoe looks light, solid, compact and reliable.

That said, every running shoe is ultimately defined and judged by its sole, the part that actually protects one’s feet from the ground. Here, the Green Silence sticks to the “one block” technology for which the Lunar is now known. Brooks calls this “MoGo”. No pattern, no section, just one big foam block.

While being lower than the Lunar sole, the foam itself looks almost identical. But once I thumb-tested the foam’s responsiveness, I quickly felt a difference: it’s noticeably harder and quite a bit stiffer.

Next, I finally headed out the door to check if this thumb-test impression proves to be right while actually running.

Lacing up the shoe is a complete new experience. I had to stop 3 times to re-lace the shoes. Due to the non straight lacing system it was hard for me to find a comfortable but solid lacing. For the first couple of runs I had the feeling that the shoe doesn’t really fit. I checked if the laces opened up or got loose. They didn’t. It just felt new and a bit unsteady. After a few runs though, I got used to that feeling and now it doesn’t bother me at all. Maybe I simply got used to it. 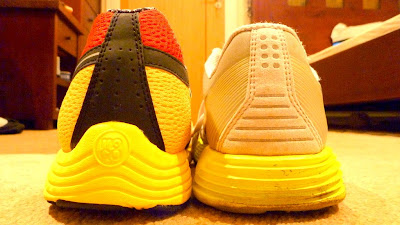 My first run with the Green Silence was an easy workout. I wasn’t excited about the cushioning. And that first experience sticks until today. The shoe is harder and stiffer than the Lunarracer. It feels more like a traditional racing flat than a cushioned racing flat. The sole is very hard and the overall protection very low. You’ll get your legs better protected in a pair of Lunarracers. Personally, I wouldn’t do my long runs with this shoe as I would fear to damage the legs. The protection provided is not enough for me (1.90m and 76kg).

A few days after I received the Green Silence, I had a chance to race in them. A 10k in Dublin’s Phoenix Park was the venue and the shoe did a fantastic job. Running fast felt good, the shoe supported me with its direct response and ultimately helped me to a new 10k PB – so well done on that.

Overall a nice, well crafted flat. But this one is for racing only – no doubt about that!

Compared to the Lunarracer – which can be used in daily training and all sorts of workouts – the Green Silence is a specific type of shoe. You have to run fast in them. No faffing around. This one is created for speed, for serious road running from 5k to 42,195k.